The Our Ocean Conference is an annual event which brings together leaders from governments, businesses, civil society and research institutions across the globe to share their experience, identify solutions and commit to actions which help create healthy oceans. KIMO International has secured an annual invitation since 2017. This year newly inaugurated president, Jerry Ahlström, travelled to Oslo to represent the organisation.

The conference presents many opportunities for cross sector networking and cooperation at an international level. Mr Ahlström had the opportunity to speak to the full gamut of ocean-concerned participants from sufers’ associations to national ambassadors to CEOs. KIMO’s work, lobbying and projects received a warm and appreciative reception.

The two standout issues, mentioned in every talk and panel discussion, were ocean plastics and climate change. Many sobering statistics were presented, if indeed any more statistics are needed to convince us that the ocean’s are in dire need of more care and protection. Researchers predict that plastic production will double in the coming 20 years and that the leakage of plastic into ocean will triple from today’s 8 million tonnes per year to 24 million tonnes annually in 20 years time. John F Kerry said that 51% of the earths oxygen comes from the ocean but only 5% of the ocean enjoys protection from  environmental harms. Mr Kerry reiterated that we already possess the tools, information and knowledge to address these problems but that we are losing ground in the fight for the oceans because the issue is not being taken seriously enough. Therein lies a role for organisations like KIMO. 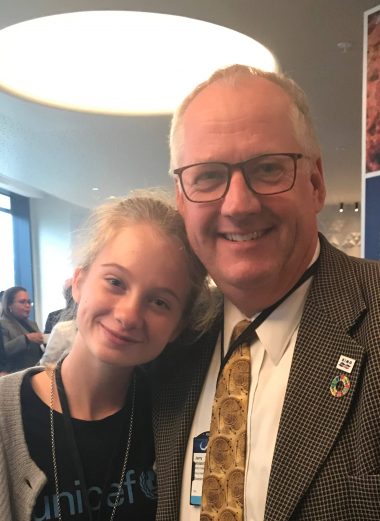 Jerry Ahlström with Penelope Lea who delivered an impassioned speach at the Conference. Norway’s fifth and newest Unicef ambassador, is a young activist who has been prominent in climate movements in Norway over the last year

The message of the conference was not all doom and gloom though as many examples of positive change were also shared. Countries are designating large areas of the ocean as Marine Protected Areas, introducing deposit return schemes and banning single use plastics. Companies are making commitments to produce their products from recycled material, a trend which KIMO is contributing to through our memorandum of agreement with Seaqual.

Conspicuously absent from the conference was any mention of pollution from oil, paraffin or artificial turf. While plastics and climate change are drawing all of the attention at present, KIMO has an important contribution to make in addressing these lesser known but very important sources of marine pollution.

Another recurring them at the conference was the importance of involving young people in the work to preserve and sustain healthy oceans. Increased involvement of the younger generation has been a theme close to the heart of our current KIMO president and we will explore ways of involving young people in our work. One of the ideas floated by Mr Ahlström was to invite members of youth councils or youth parliaments to attend KIMO meetings and offer their views.

By 2020, increase by 50% the number of vessels participating in Fishing for Litter in the north east Atlantic and Baltic Sea regions.

Fishing for Litter is a simple, effective project for cleaning up the oceans and involves the key stakeholders – fishers. Fishers are given large, hardwearing bags on board their vessels into which they put any marine litter that they bring up in their nets as they fish. When they return to port they land the litter and it is taken and disposed of at no cost to the fishers. As well as the physical removal or marine litter from our oceans, Fishing for Litter raises awareness amongst the fishing community about the issues caused by marine litter and changes behaviour so that fishers are less likely to discard garbage and fishing gear into the sea.

Learn more in the video below:

This is an ambitious commitment on the part of our organisation. The seriousness of the current environmental crisis requires no less.